My Dog Jack is Reviewed 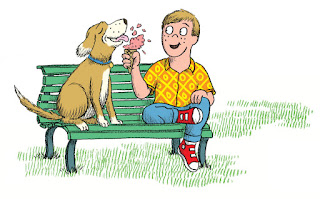 Here's a decent little review of my latest illustration project.

From Publishers Weekly---"When Carson takes his dog, Jack, to the vet, she informs them that Jack is too fat: "He needs less food and no snacks!" as well as a lot more exercise. Jack expresses his skepticism via thought bubble ("Fat chance"), though Carson dutifully starts Jack on a diet and exercise regimen. But Carson isn't practicing what he preaches: while Jack plays fetch, runs up stairs, and visits the gym, Carson is wolfing down junk food and lazing around. Throughout, readers are privy to Jack's snarky retorts: "You've got spaghetti sauce all over your face, pal," he tells Carson, who won't share his enormous dinner. A return visit to the vet means kudos for Jack--but not for Carson, who now needs help from Jack in the weight-loss department. Rex has a lot of fun with the details in his cartoon illustrations (Carson sits in the grass eating fried chicken and drinking soda while "playing" fetch with Jack), and the dog's-eye-view perspective (and Jack's evident sense of humor) help make a potentially heavy-handed message about child obesity easier to swallow. Ages 4–8. (Mar.)"
Posted by Michael Rex at 4:28 PM