As promised, today we wander deep into the black-box jungle for a behind the scenes peek at the talent swinging onto stage in this season’s simian smash, “Furious George Goes Bananas!” Live!

Produced by The Chatham Community Players, it featured the primal playacting of performer Chris Furlong. His hair-raising rendition of the hirsute hero moved the audience to laughter, tears, and eventually further from the stage. His chest-beating bravura brought the house down in a furry and ferocious tour–de-furiousness!

As writer/director/illustrator/producer/stage technician, Michael Rex, said of his star “He monkeyed around real good! He’s a top-shelf trooper!” On the flip side, Rex denies having said, “He got the part because he had the suit!” while stepping out for an early morning donut break.

More on the fur suited Furlong! He’s been swinging around on stage for many, many years and is now goes bananas as a Teaching Assistant at the NJ FILM SCHOOL! 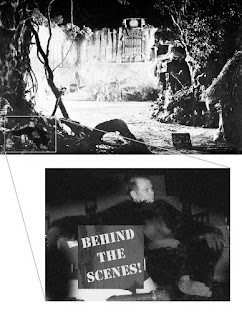 This pic shows the massive sets that Rex and co. slaved over for their two show run of “Furious George Goes Bananas!” Live! In the inset, is thesp Furlong having a rare, out-of-mask experience.
Posted by Michael Rex at 6:20 PM No comments: