Aside from a few doodles, this is really the "first" Fangbone drawing I ever completed.  It's still very rough, and sketchy, but this image nailed down what I was thinking about.  "Bonesword" was the kid barbarian's name for a short while, but was changed to Fangbone very early in the project.

Bill also became bolder, and a more important part of the story.  In this drawing he looks like the just tags along being scared.

I think that original title of the book was "Bonesword and Bill" for a bit as well.  The main reason "Bonesword" was changed is that it was a tough word to read correctly.  It could be read as "Bone-sword" which was correct, but people also read it as "Bone's-word" which was not my inattention at all.

I like this drawing.  When I was first thinking about this idea, it was more of an illustrated chapter book, and not a comic, so this detailed, fussy style might have worked. 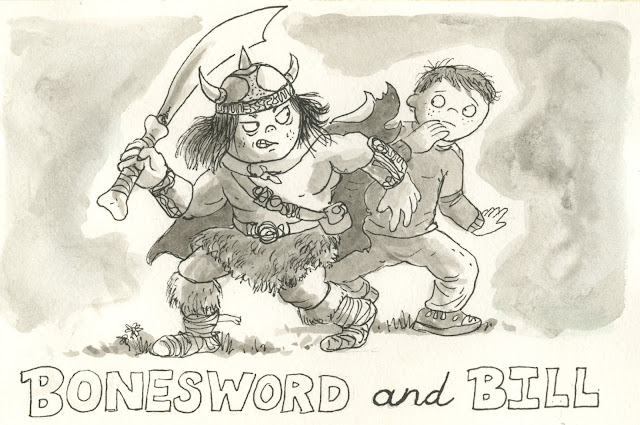 Posted by Michael Rex at 7:07 AM No comments: