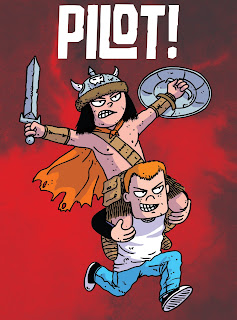 It is with great excitement that I can finally announce that Disney XD Canada has ordered a full, 22-minute pilot for Fangbone!

My amazing producers, Michelle Melanson Cuperus and John Leitch have been working all winter to make this happen. Their company, Radical Sheep Productions recently won a Canadian Screen Award for Best Preschool Series for their outstanding show, Stella and Sam. The Canadian Screen Awards are the equivalent of an Oscar/Emmy for Canadian produced films and TV.  Since having great success in the preschool market John and Michelle are planning to jump into the boys 8-12 market with Fangbone.

Stella and Sam is also based on a series of children’s books, so they are well versed in the difficulties, and opportunities, that arise when translating books to an ongoing series.  Michelle also produced William Joyce’s George Shrinks.

Mercury Filmworks, located in Ottawa, will be doing the animation for the pilot.  They’re a wonderful studio that has made Jake and the Neverland Pirates, Fish Hooks, Toot and Puddle, Curious George: The Movie, Kick Buttowski, and the above mentioned Stella and Sam.   I’ve seen some character studies already, and they have stayed very true to my art, while making it slightly bolder and simpler for animation purposes.

Simon Racioppa and Richard Elliot are currently writing the script, which we have been discussing for a while and contains a good amount of my input.  They’ve been writing for animation since 1997, and have done many types of shows from Franklin to Teen Titans. The treatment they wrote shows that they really understand Fangbone and Bill’s relationship, which, along with all the goofy monsters and fights, is the focus of the show.

My role is Executive Producer.  I get to review, comment, and sign-off on everything.  So far, my comments and suggestions have all been well received. It is possible, when a book is optioned, that the party producing the work might not really understand the book, or not intend to keep the creator involved, but I have run into none of that.  It’s been nothing but a joy so far.  This really all has been happening very quickly, as the contracts for the option were only signed in October.  I couldn’t be more thrilled to have such a great group of talented, fun and positive people working on this.

The above art was drawn by me, and is not by Mercury Filmworks.  The art was created for this event.
Posted by Michael Rex at 9:38 AM 2 comments: