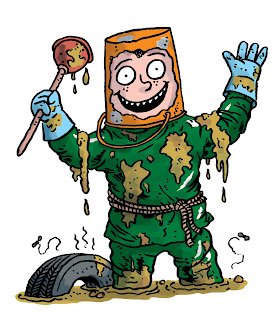 Happy New Year!  2013 is looking to be very exciting. Random House is launching my new series, "Icky Ricky" in May.  So far, two books are done, the third is being worked on, and 4, 5, and 6 have been contracted.  I'm really excited about these, as I think they will real fill a need in the market.  Like the excellent "Bad Kitty" books, or the classic "Captain Underpants" books, Icky Ricky is a chapter book that has illustrations on every page.  The first two "Icky Ricky: The Toiler Paper Mummy" and "Icky Ricky: The End of the World" will both be out in May.

Fangbone is moving ahead, this time as a cartoon.  A wonderful company is Canada called Radical Sheep has optioned it, and we have a development deal with Disney Canada.  Writers have been hired, a pitch bible and sample script are in the works, and in February we will have our next big sit-down with the Mouse.

Soon, I am going to begin posting some very short Fangbone! stories.  Actually, they're more like skits.  I'll be putting them under the title "Fangbone! 4 Free."