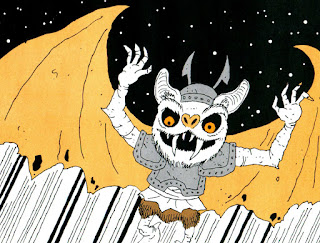 This review comes from a site called "Monsters and Critics" that reviews works that tend to have monsters in them. The site is well named.

From Monsters and Critics..."Eastwood Elementary has a new student, and he's nothing like the other kids in 3G. Fangbone is a barbarian warrior from another world! And he's been charged with the task of keeping a deadly weapon from Skullbania's vilest villain, Venomous Drool. Can Fangbone's new classmates team up to help him triumph over hound-snakes, lava-ferrets, and his first pop quiz?"

For the rest of the review, please visit Monsters and Critics
Posted by Michael Rex at 1:05 PM