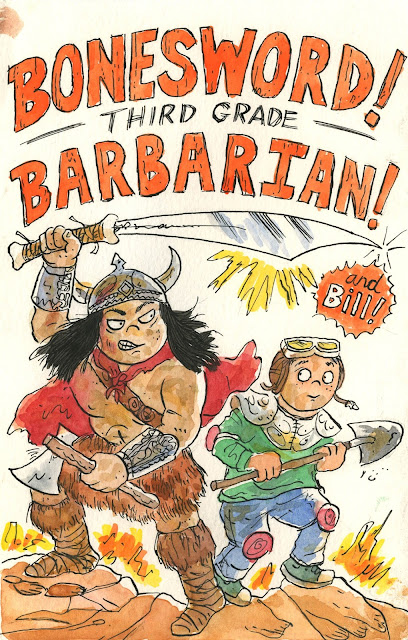 I hand kind of forgotten about this, but “Fangbone” was originally named “Bonesword.” When I pitched the “third grade barbarian” idea to my editor, he really liked it, but said that the name didn’t work.  He was worried that it would read as “Bones Word” as opposed to “Bone Sword.”  He sent me off to come up with another name, and after putting together some words that I liked, “Fangbone” showed up.

If I remember, I wanted his sword, which was made of bone, to play a part in the narrative, but that didn’t end up going anywhere.  Bill’s name was a no-brainer.  I just needed a simple, one-syllable boys’ name that was very common.

This was one of the very first drawings for this idea that I made, and I like the loose watercolor.
Posted by Michael Rex at 1:34 PM