I was looking at some of my stats and realized that I hadn’t been blogging nearly as much as I had last year.  In truth, I’ve been very busy with writing, drawing and visiting schools.  I thought I’d do one big post to talk about Fangbone. 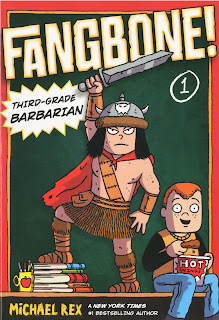 Book #1 tells the story of how Fangbone comes to our world, and makes friends with Bill, and how he deals with the day-to-day life of a third grader.  Fangbone is determined to build his own army, and at the same time, he is taught the ways of “Bean Ball” and helps his class out in a pinch. 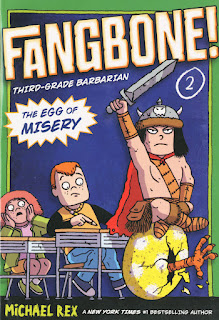 Book#2 is about a mysterious egg that arrives from Fangbone’s world with instruction for hatching.  Bill, Fangbone, and all of the other kids in their class join in to take care of the egg, in hopes that it’s a dragon.  The class is also preparing for an “Extinction Pageant,” and their entry, The Dodo Bird, doesn’t quite make the grade. 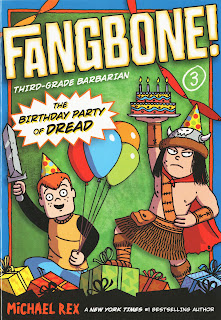 Book#3 came out in August, and features Bill having a curse put upon him.  The curse ensures his doom at the hands of a giant beast called “The Crusha.”  Fangbone and Bill are also preparing their entry in the school’s “Invention Convention,” and hatch a plan to trick the monster, and get a good grade on their invention at the same time.

I designed Fangbone! for boys, and especially boys who hate to read.  I knew I had done my job when I started getting letters like this… “Then this week he came home with Fangbone. Well, my son was so excited to read, and I was so interested we read it together. Thank you for getting my son to read a book. The librarian is new and I found out she is starting a graphic novel section.  I think she found and saved Fangbone for my son!”

Below are some reviews from around the web...

The Library at the End of the Universe

Currently, there are plans for more Fangbone!  but I can’t talk about them until contracts are signed.  So there will be more, but he just might be showing up in a different way.

I hope you take the time to read some of these reviews, and hopefully seek out a copy Fangbone! to read.  It’s available through all major chains, independent, and online stores!