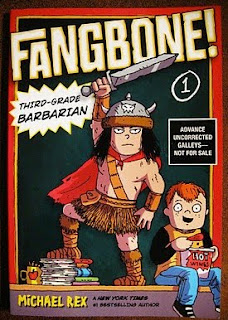 I just got my first “industry” review for “Fangbone.” It’s an odd one. They seem to say many nice things about the book, but lead it off with some really negative comments. Dealing with reviews can be tough sometimes, but at this point in my career I don’t let them get to me. My book was reviewed on the “Kids Comics” page where every other book reviewed was full color. Perhaps the anonymous reviewer had certain expectations that “Fangbone” did not meet.

“Flat, primitive art in yellow and gray brings to mind “what if the Wimpy Kid was instead Conan’s kid?” The book’s not attractive, but it is easy to read and very expressive. It looks like something a classmate might have scribbled on notebook paper and passed around, providing a sense of “I could do this!” The familiar plot sends the young Fangbone, normally picked on by the bigger warriors, on a mystical quest that, if successful, will reward the clan with victory against the enemy army. The young fighter is surprised to find that his mission involves blending in at an elementary school, which leads to much culture-clash humor. It’s cute, funny, and will win over most readers with its commitment to its premise. It’s even heartwarming, as Bill (Fangbone’s friend, previously thought to be a loser) learns confidence, and Fangbone gains an appreciation for teamwork during a dodgeball-like game. The modern touches—such as hot wings and Bill’s ADD medicine—ground the book, while jabs at school philosophy through the character of the goofy principal will entertain adult readers. Ages 7–9. (Jan.)”