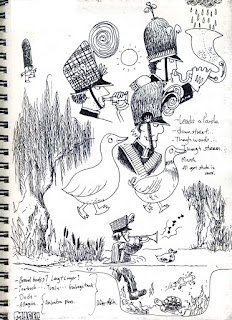 Here’s more of the lost marching band. On this page there’s a duck that, I believe, was going to lead them astray. Looking at this idea made me think of when I was in high school. I was in the marching band for four years, even though I never really learned to read music. If you weren’t an athlete, marching band was one of the few other social activities that you could get involved with. Anyway, every year on Homecoming we had to march through town to the big Pep Rally (jeez this is corny stuff).

Anyway, one year it was rainy and cold and really unpleasant, and my good buddy and I kept daring each other to ditch the parade. Our plan was to run onto a side street, and take a path through the woods that would lead us right to the High School and the rally. The idea was that in the rain and fog and excitement of a parade (!), no one would notice that the trombone players were missing. We chickened out. We didn’t feel like getting in trouble the way the bass drummer did the year he bolted an empty beer can to his hat, and marched in the half-time show.
Posted by Michael Rex at 9:02 AM