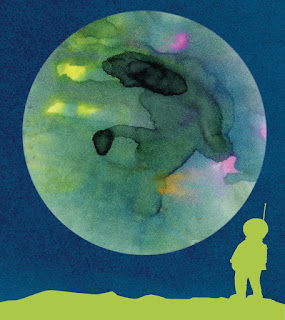 My soon-to-be-five year old son came home from daycare with these great round watercolor paintings. I thought they were beautiful, and, naturally, I thought that they looked like planets. This one was my favorite.
Posted by Michael Rex at 11:19 AM No comments: 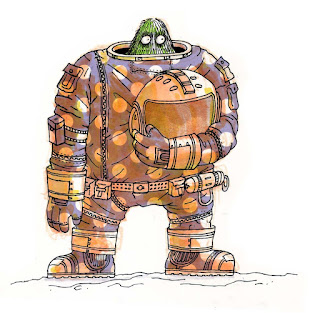 I haven't had the chance to get back to my astronauts for a while, but managed to squeeze this out the other night. It was done with marker and the polka-dot pattern was added digitally. Fun, but stiff.
Posted by Michael Rex at 11:13 AM No comments:

Last Sunday I took part in the "Monster Drawing Rally" for the Dumbo Arts Center down in Brooklyn. It was a fun event with dozens of artists drawing in hour-long shifts. The works were offered for sale, with the money going to the Arts Center.

I didn't have to draw monsters, but I'd had this idea of a class picture floating around in my head for a while, and I wanted to get it down on paper.

The hour wasn't really long enough, and I could have gone another hour and added more details and richer values. But I like it, and it sold, so someone else must have liked it too.

If you click the drawing it will take you to the flickr stream with all of the other drawings made that day. Some are still for sale. My Time in the Tower 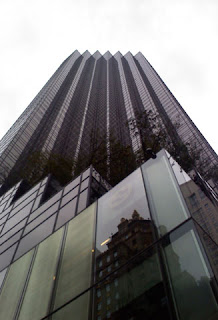 There are certain things that I agreed to not talk about in my contract concerning my appearance on “The Celebrity Apprentice,” but there are some things I can talk about, so here it goes.

When I arrived for the shoot I brought a bunch of supplies with me, (such as swatch books, markers, and tracing paper) but I was not allowed to use any of them. They wanted the teams to have the exact same supplies, and since the other illustrator didn’t bring anything, I couldn’t use what I had brought. That was kind of odd to me because this is considered “reality TV” and in real life your chances at winning are better if you are prepared.

One of the things that surprised me was how little prep time we had the day of the shoot. We arrived early and checked out the computers and scanners to make sure they had everything working right. Soon we had mics put on us, and in a few minutes they said, “You’re on,” and sent us through the doors to meet the celebs on camera. Oddly, I wasn’t nervous about being in front of the cameras. I walked into the room, met the team, and was briefed on the task. If there’s one part of my life where I feel like a stone cold professional, it’s my illustration. I know what I’m doing, and I can work fast. I was able to tell them what I needed, and we got to work right away.

Yes, the Celebrities really did write the story by themselves. I was not allowed to help, or even guide them. In fact, they didn’t know that I was a writer. I desperately wanted them to make the story shorter, but I didn’t have a say in the matter. And, yes, I drew an entire 24-page book, in color, in about six hours. I did have help with scanning the images, and setting them up. In fact, I could not have completed the project if it weren’t for the amazing designer I worked with. He did most of the scanning, set the type, and prepared everything for the printer.

We had a hard deadline, and once it hit we had to stop no matter what. We finished with minutes to spare.

Most people really want me to dish on the celebrities, but there’s really nothing to say. Everyone was professional towards my work, everyone was very nice and they all seemed to respect what I was doing for them. In fact, at the end of the day, they all gathered around me and thanked me and shook my hand and made me feel quite appreciated.

While having Marlee Matlin buy me lunch ranks high on the day’s stand-out events, the real highlight was having a big long talk with LaToya about “bling,” and how she liked a lot of “bling,” and how much “bling” our character in the book should have. I have to say, while everyone was very friendly, LaToya was a real sweetheart.

Sadly I did not get to meet Gary Busey or Meatloaf.

I’m sitting down to watch the episode in 30 minutes. I think I’m more nervous now than I was on the day of the shoot. I know it’s kind of goofy, but I really hope my team wins!
Posted by Michael Rex at 5:37 PM 4 comments: 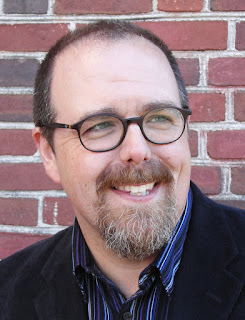 My Dog Jack is Fat 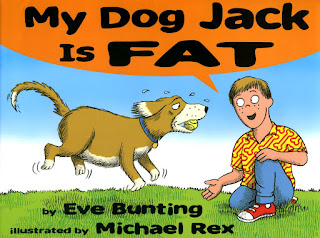 I also just received a copy of my other new title, “My Dog Jack is Fat.” It’s out right now from Marshall Cavendish. The mighty Eve Bunting, who has authored over 250 books, wrote this quirky little story. It’s the first title that I have illustrated for another author since 2006. Oddly, that book was called “Jack the Builder.” However, they are not the same Jacks.

“My Dog Jack is Fat” shows what happens when we neglect the health of our pets, and, eventually, our own health. It’s a laugh riot. Honest.

I’m not providing purchasing links to my books from this site because I feel that everyone has their own favorite place to shop, and I don’t want to favor any one retailer. I hope you get the chance to check it out, and share it with friends and family. Oh! Ask for it at your local public library too!
Posted by Michael Rex at 8:37 PM 2 comments: 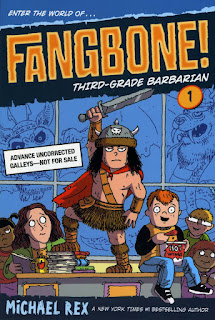 Wow. It’s here. It’s finally here in my hands. My first graphic novel for kids. “Fangbone! Third Grade Barbarian,” will be published in April of 2012 by Putnam, the publishers of my last six picture books. It’s a 128 page full-on comic about a young barbarian who ends up in our world, and has to figure out how deal with school, hot-wings, and indoor plumbing, all while protecting a magic evil toe. Of course.

I started this about a while back, and it’s been a huge project. Today I received a copy of the bound galleys. Galleys are cheap, quick print runs that are sent out for reviews and used by the sales and marketing teams. While the cover is full color, the interior is black and white. The book will be in two colors, orange and black, when it goes to its first proper printing.

I’m currently working on book #2 and #3, and all will be out during 2012. I am so excited by this. I feel that it’s the funniest, warmest, goofiest and most appealing thing I’ve ever done. If I were in third grade, I’d go goofy over this book! I will be posting much, much more about Fangbone.
Posted by Michael Rex at 7:39 PM 1 comment: